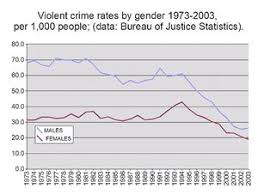 Who knows why people commit crimes maybe because they think they can get away with it. Maybe they’re just desperate, hard up for money, or doing it for the sheer thrill of taking the risk. In any case, people commit crimes every day: an ex-con robbing a convenience store, a businessman giving a client a much-needed, doctor-prescribed painkiller. Hire professional writers at Acemywork.com.

It’s so easy to commit a crime that they go unnoticed and often without consequence. And if you look at human nature, you see how most of the ruthless criminals of ancient history have mostly always been men. Sure there has been some women, but women are just less engaged in criminal activity than men. It comes down to anatomy and psychology, parental instincts and statistics.

Lets look at brain development for more insight into this argument, that women are less engaged in criminal activity than men. It has been documented that a female’s brains develop about an average two years earlier than male brains, so that means a male’s brain develops much later than the female’s brain.

It is also common knowledge that the male brain is not fully developed until the age of 25, especially the prefrontal cortex of the brain responsible for impulse control and decision-making. Why is this important? Because it shows how men especially young men are more likely to make bad life decisions, ones that most certainly lead to, or involve crime, even if only petty crimes. This is certainly an indication of how women are less engaged in criminal activity than men.

With this said, women are also more likely to experience, and pursue, their parental instincts when compared to men especially young men, 18 to 25, the age when too many young men are arrested for committing various crimes underage drinking, drinking, and driving, drug possession, assault and battery, etc.; though some of the men being convicted are of course innocent, a majority of them were involved in a crime or crimes.

Females well, teenage girls reach puberty before males (adolescent boys) do, and females mature much faster than men. While young women are looking for life partners, creating a future, a family, and a life, men their age certainly are not. Young men in their late teens, early 20s, are drinking and driving, doing drugs, taking risks and frequently break the law. They are not thinking of these things life partners, their future. Some are, of course, but until they are in their mid-20s, the brains of males are not fully developed like females, which illustrates how males may be more likely to engage in criminal activity than females.

All you have to do to see that women are less engaged in criminal activity than men is look at the numbers of inmates in the American prison system. A graph on prisonpolicy.org shows the American prison population by gender, United States Incarceration Rates By Sex, 2010. The graph shows the number of people incarcerated per 100,000 people of that sex; it shows 126 females to 1,352 males. If more men are serving time in a penitentiary than women, clearly this is an indication of how more men are engaging in criminal activity than women.

In conclusion, women do less crime than men. Consider the evidence it comes down to anatomy, biology, and psychology; then there’s instincts, sexual vs. parental; and top of that, there are the numbers: there are many more men in prison than women; so men are more likely to engage in criminal activity. Or consider this notion what if women are just better at hiding their criminal activity than men? It’s a very objective question to consider, and it is always important to consider the alternate school of thought, the other side of things.

After all, things aren’t so black and white, more of a gray color, when mixed together. Nonetheless, the evidence illustrates that men are more engaged than women, in criminal activity. This is a problem our society must face with objectivity and compassion. Why is this so? It doesn’t have to be this way, however. There is always a better way to reach and teach young males and get them to steer away from drugs, alcohol abuse crimes, essentially. There is a problem if the men of your community are in jail and not at home or at work providing for their families.