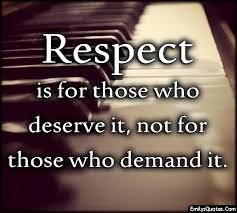 Who and What Deserve Respect?

Respect is a universal virtue. However, conceptions of what deserves respect and who should be respected differ in culture, established local practices, and individual moral education. The characteristic of a respectable person in a particular community, for instance, is dependent on the manner by which a particular cultural group conceives and recognized the value of respect in peaceful coexistence.

There are several sources of moral education but good moral training is often acquired through institutions cultivating sense of reverence, an attitude believed vital to morality. Academic institutions are morally educative community influencing students’ moral principle, values, and compliance with social standards. In fact, transfer of academic knowledge and development of social and culturally appropriate values and attitude in school occurs simultaneously as a formative process of linking moral values and intellectual capacity, reinforcing values learned at home and community, and developing a strong commitment to moral behavior.

The above commitment is the reason why most educated individuals are ethics-conscious, perpetually respectful of life and authority, respectful of other people’s feelings, belief, property, and rights, and easily earn the respect of others. They normally offer the apology for their mistake or negligence as truth and authenticity in moral principle earns or deserve respect.

Some of the #ReasonsToRespectJB according to social media users (most probably avid fans of JB) despite nasty behavior is the courage to admit his mistake and make a public apology. Another is his well-publicized kindness and good deeds, which is in quite interesting.

Considering the fundamental moral principle associated with the apology, admission of mistakes, charity, and good deeds, these acts should be supported by important virtues to earn respect. For instance, a respect-earning apology is one that is sincere, do not make excuses for such behavior, and offered in a timely manner.

Unfortunately, JB’s public apology contained praises like I am a human being I think people forget that, I’m growing up, figuring some stuff out, and others. JB even used bad publicities (ex. labeling him gay at age 16 and a father at 17) as an excuse for his behavior. The untimely public apology blaming inherent human weakness such as young peoples natural curiosity, stress from bad publicity, lack of knowledge, and public misjudgment was actually considered by some social media users as the strongest reason to respect JB.

It is really sad but insincerity doesn’t deserve respect. It is important to consider that although the courage to admit a mistake and offer an apology for them are excellent moral values, JB is a young celebrity that thrives on reputation and fans, rapidly losing disenchanted fans and product endorsement. He made so many excuses for his mistakes and therefore not guilty, insincere, and misleading the public about his true intention.

Moreover, in terms of moral education, JB entered show business at a very young age and graduated from high school in 2012 with the following comments. I’m free! It was hard doing school and work every day. at school, usually you have to do a lot of writing and reading. I’m really not into that stuff. I like to be out there! Now, was his lack of concern over intellectual development in high school affected his moral education? Probably Yes.