Schizophrenia is a form of mental disorder whereby people abnormally interpret reality. It may occur as a result of a combination of delusions, hallucinations, and disordered behavior and thinking that is disabling and interferes with the daily life of a person. 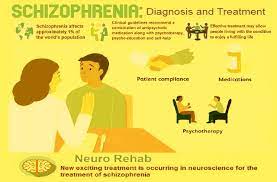 Schizophrenia requires lifelong treatment. However, if diagnosed early enough, the symptoms can be controlled to help avoid serious complications that would otherwise affect the long-term outlook.

Schizophrenia can be described as a brain disorder. Common symptoms of this disorder include disorganized speech, hallucinations, delusions, lack of motivation, and trouble thinking. Early treatment can help control these symptoms and avoid the possibility of them recurring.

There is no cure for Schizophrenia. However, a lot of research is being done to come up with safer and innovative treatments. In addition, probable causes of this disease such as genetics are being studied.

The exact cause of Schizophrenia is not known. However, it is believed that a combination of factors such as genetic, environmental, physical, and psychological factors could make a person develop this disorder.

Naturally, some people are more prone to Schizophrenia compared to others. Living an emotional and stressful life could further worsen the situation and cause them to develop this disease. Some people experience symptoms of schizophrenia while others do not.

Twins have been studied to establish if the disorder is inherited.

Twins are used since they have the same genes. I one of the twins has schizophrenia, there is a 50% chance the other twin will develop the condition as well.

In non-identical twins, if one twin develops schizophrenia, there is a 1 in 8 chance of the other twin developing the condition as well. This means that genes alone cannot be the only factor that causes the development of schizophrenia.

These complications include premature labor, low birth weight, and lack of oxygen during birth.

What are some of the triggers of Schizophrenia?

Triggers are the things that can increase the chances of people  developing schizophrenia and they include:

In men, the first symptoms of Schizophrenia appear in the early 20s. Schizophrenia affects women in their 20s and 30s. The period between the onset of symptoms and full psychosis is known as the prodromal period.

The prodromal period can last for days, weeks, or years. It is difficult to identify since there is no specific trigger. Instead, a person may notice changes in behavior such as trouble sleeping. a change in grades at school, temper flares, withdrawing socially, and difficulty concentrating.

The term positive is used to refer to actions or thoughts that are not based on reality and can be called psychotic symptoms. Positive symptoms include:

At acemywork.com, we offer professional assistance to students writing assignments on schizophrenia diagnosis.

Disorganized symptoms are positive symptoms that indicate the person is not thinking clearly or responding as expected. They include;

The term negative is used to note the absence of normal behavior in people with this condition. Negative symptoms include reduced energy, poor hygiene, and grooming habits, speaking less, lack of emotion or a limited range of emotions, loss of interest in life, and withdrawal from friends, family, and social activities.

Symptoms of schizophrenia in teenagers

Compared to adults, teenagers are less likely to have delusions or visual hallucinations.

When a person with schizophrenia symptoms visits a doctor, the doctor will perform a physical exam and a complete medical history. There are no specific laboratory tests done to diagnose schizophrenia.

Doctors may use blood tests, brain imaging studies, and other tests to rule out intoxication or physical illness as the cause of the said symptoms. If no other physical reason is found to be the cause of the symptoms, the doctor then refers the patient to a psychologist or a psychiatrist.

Psychologists and Psychiatrists are mental health professionals who are trained to accurately diagnose and treat mental illnesses. They use specially designed assessments and interviews to evaluate a person for any psychotic disorder.

Based on the person’s report of their symptoms and the family report of the same, the therapist can then make the diagnosis. They also rely on their observation of the behavior and attitude of the person.

Rehabilitation and Living with Schizophrenia

Treatment can go a long way in helping people with schizophrenia to live productive and fulfilling life. Some patients do very well once put on treatment while others continue to show symptoms and need extra support and assistance.

Once symptoms are controlled, different types of therapies can be used to continue to help the patient manage the illness and better their lives. Psychosocial support and therapy can help patients cope with stress, learn social skills, prolong periods of remission and identify early warning signs of relapse.

Schizophrenia is one of the mental disorders that cause people to interpret reality abnormally. there is no specific cause for this condition. However, risk factors for schizophrenia include genetics, complications during birth and pregnancy, and brain development.

There is no cure for schizophrenia. There is research going on to develop treatments for schizophrenia that are safer and more innovative. Experts are studying genetics, observing the brain structures with advanced imaging, and conducting behavioral research to unravel the causes of this condition.

People with schizophrenia can live productive and fulfilling lives if they can access treatment given to manage the symptoms of this condition.

Talk to us today if you need help writing your schizophrenia diagnosis assignment.