Infertility can be defined as the inability of a woman to get pregnant even after trying to get pregnant for 6 months to 1 year especially in women above the age of 35 years. The term infertile can also be used to describe women who can get pregnant but are unable to stay pregnant. 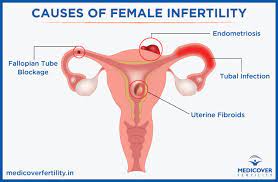 Pregnancy or conception involves several steps. Any problem at any of these steps may cause infertility.  For a woman to get pregnant:

Infertility can also be described as a disease that limits or impairs a woman’s ability to get pregnant or to give birth to a baby. In heterosexual couples, infertility  is diagnosed after the couple has tried getting pregnant for a year.

Among heterosexual couples (man and woman), causes of infertility can be divided into unknown reasons, male problems, and female problems. Each of these factors is an equal contributor to infertility.

Infertility that is due to female problems is known as female factor infertility or female infertility. Infertility in women is very common. 10% of women deal with infertility. Chances of becoming infertile increase as a woman grows old.

Causes of Infertility in Women

Infertility in women can be caused by several factors. Pinpointing the specific cause can be a little challenging. In addition, some couples are known to have unexplained infertility or multifactorial infertility

Who is at Risk for Infertility?

A woman’s risk of infertility can be increased by several factors. Factors that can contribute to infertility in women include general health conditions, lifestyle choices, age, and inherited genetic traits.

Factors that can increase a woman’s risk of becoming infertile include:

A woman’s chances of becoming pregnant reduce as she ages. In most women, age is the main cause of their infertility. This is probably because in today’s world most women are waiting until they are in their 30s and 4os to have children.

Women who are 35 years or older have a high risk of developing fertility issues. This is because of:

Diagnosis and Testing of Infertility in Women

When a woman goes to see a doctor, the healthcare provider will need to know and understand the menstrual cycle of the woman, if they have any abnormal discharges or vaginal bleeding, pelvic pain, miscarriages, and past pregnancies.

A woman is likely to be asked the following questions:

Several tests can be done. Some of these tests are done as physical exams. They include:

Lab tests that can be done include:

How Is Infertility in Women Treated?

Infertility in women can be treated in several ways including:

In ZIFT, fertilized eggs are placed into the fallopian tubes within 24 hours.

Infertility in women is caused by several factors such as irregular ovulation, blocked fallopian tubes, problem with the uterus, and quantity and quality of eggs. However, infertility can be treated in different ways.