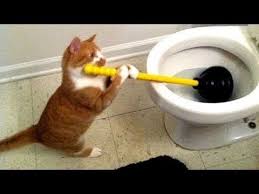 It seems that every other minute on social media, you see some strange but usually hilarious animal video going viral. Dogs chasing their tale turtles dancing to Lady Gaga, cats knocking down drinking glasses, shattering them. If there is an argument that videos like these be outlawed on YouTube, which is one of the most widely used video-sharing websites in the world, it’s a weak argument for sure. Unless it’s grotesque or offensive in nature, humorous cat videos should be allowed on YouTube. Allowing these videos to be seen seems to do no damage at all, and videos of this sort may even help people to some extent.

To begin with, funny cat videos belong on YouTube because people love cats their cuteness, their movements, traits, and behaviors so it’s logical for people to enjoy watching videos of them on this website. And if a website like YouTube was created for people to communicate, to share videos of common interests, as well as for people’s general enjoyment, it only makes sense for funny cat videos to be uploaded to the website. Surely not everyone loves cats and cat videos, but many people do as seen in these kinds of videos going viral. There is a reason why so many of the videos going viral are videos that first are introduced on YouTube. HIRE WRITERS ONLINE.

Secondly, funny cat videos should also be allowed on YouTube for another reason: such kinds of videos benefit people. Yes, in the stressful, fast-paced, high-pressure society we live in, with high taxes, an even higher cost of living, it’s imperative that hard-working people find outlets for their stress. And better than alcohol or drugs, there is humor. The physical act of laughing sends naturally occurring endorphins and other happy-feeling neurotransmitters rushing through a person’s brain, in turn lessening stress and leaving a person feeling happier, healthier and more relaxed.

When a person, for example, sees a video of a cat demanding their owner’s attention almost to the point of being aggressive, but in a comical way, the viewer tends to lighten up. Watching a video of a cat doing strange things, like jumping three feet in the air at the sight of a cucumber on the ground behind them, is just therapeutic. When it comes down to it, when one considers the benefit of watching silly cat videos, there should be no doubt whatsoever that funny cat videos belong on YouTube.be. It is the appropriate place for such videos. It screams funny cat videos.

Lastly, YouTube is just the place for silly cat videos; therefore, they should be allowed on the website. When comparing YouTube to other social media, especially professional networking websites like LinkedIn, one sees the frivolous nature of YouTube and how it is meant to be silly and humorous and nonprofessional. That’s the entire point of YouTube: It does not have an air of pretentiousness about it, and it is traditionally not used to grow a business or to land a person a job; though this is sometimes the case. So, evidently, YouTube is the perfect place for silly cat videos as well as other humorous videos that become a source of healthy escapism for people, and not just animal videos.

To conclude this argument, consider the above points that demonstrate how humorous cat videos surely belong and should be allowed, on YouTube: people love cats and cat videos; cat videos make people laugh and smile, and people need that, and YouTube is meant for these kinds of videos. Any arguments challenging the allowance of funny cat videos on this widely used site are completely erroneous, fallible and one-sided. YouTube provides users with a service, and that service provides an escape, a way for people to release their pent-up, hostile, violent emotions that would otherwise distract them from living normal, fulfilling, happy lives.