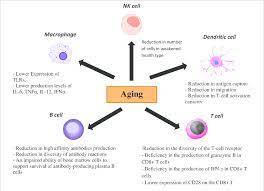 Changes that occur in the innate and adaptive immune response as a result of aging are known as immunosenescence. Changes in the immune system due to old age may result in autoimmunity, malignancy, impaired wound healing, increased susceptibility to infection, and decreased response to vaccination.

In some cases, changes in the immune system due to aging may cause asthma to persist into late adulthood or cause asthma to develop in people past 50 years. Many old people suffer from asthma. The number of old people with asthma is increasing as the general lifespan increases.

Changes in the innate system that may lead to the development of asthma later in life or make it more severe in older people include changes in the airway neutrophil, eosinophil, mast cell numbers, and function, and impaired mucociliary clearance.

In addition, reduced antibody responses and antigen presentation altered by age may increase the risk of old people developing respiratory infections such as asthma. As [people grow old, the immune system is not able to tackle infections as effectively as it used to.

This also causes old people to be less responsive to vaccinations. The immune system in old people is linked to chronic inflammation which increases the chances of most health conditions associated with old age.

Aging Changes and Their Effect on the Immune System

Regular physical exercising and maintaining a healthy diet can go a long way in helping a person maintain a healthy immunity even into old age. Currently, life expectancy is high. The evolutionary history of human beings has adapted us to various lifestyles although they have changed drastically.

During old age, the immune system does not only weakens but also becomes imbalanced. Old age, therefore, affects both adaptive immunity and innate immunity. Innate immunity is our main defense against infections. In old people, it does not resolve after the passing of the initial threat thereby causing chronic systematic inflammation.

On the other hand, adaptive immunity is the immunity responsible for remembering and attacking specific pathogens. As people age, it loses its ability to defend itself against fungi, viruses, and bacteria.

When old people lose their adaptive immunity, they not only become more susceptible to disease. Loss of adaptive immune may reactivate dormant pathogens that were suppressed before.

Having a weak adaptive immunity means that the bodies of older adults cannot respond strongly to vaccinations as they used to before. In younger people, after an initial injury or infection, their immune system switches to an anti-inflammatory response.

In older people, however, this is not the case due to the accumulation of aged or senescent immune cells.

Some of the T cells then differentiate into cells that fight the same pathogen in future. The amount of T cells in the body remains the same throughout. However, undifferentiated cells reduce and shrink over the years since a large number of them commit to fighting particular infections.

It is for this reason that bodies of older people are not able to fight new infections as effectively as they used to. This is also the reason vaccinations provoke weaker responses in older people. This means that they have less protection against pathogens and infections.

Older people harbor a latent infection of human cytomegalovirus which is a viral infection that is persistent and has few or no symptoms.  This infection can deplete the immune resources of older people thereby making them susceptible to viral infections. This reduces the effect of vaccinations such as the influenza vaccine.

How to reduce the effects of aging on the immune system

Skeletal muscles produce myokines which are proteins that preserve immune function and reduce inflammation. Exercising helps maintain muscle mass to protect the human body against infections and health conditions like cardiovascular disease and type 2 diabetes which are associated with chronic inflammation.

Older people are encouraged to take part in mild physical activities such as aerobic fitness. Being physically fit means less immunosenescence. In addition, older adults who are physically fit and active respond very well to vaccination compared to those who are less active.

Being physically active helps older people to produce antibodies to fight off infections even before they are vaccinated.

There is a relationship between the immune system and the skeletal muscle. On one hand, skeletal muscles are known to produce myokines that are anti-inflammatory. On the other hand, chronic inflammation speeds up the loss of muscles in sarcopenia.

A diet that is recommended is the Mediterranean diet that comprises of:

Older people who maintain a healthy weight and exercise regularly are known to have less senescent T cells as well as reduced levels of pro-inflammatory cytokines in their blood.

To reduce risks associated with the aging immune system, it is important to:

If you are struggling to write your assignment on the effects of aging on the immune system, reach out to us at acemywork.com. Our services are affordable.