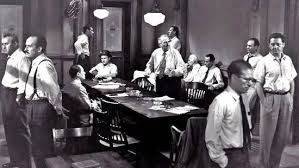 12 Angry Men is a gorgeous image of the American democracy in action. Deep inside the play holds a profound patriotic credence in the legal system in general. This dramatic piece concerns the deliberations of the jury of a homicide trial, centering on Juror Eight, who was the only hanger-back in the whole guilty vote. He didn’t want to prove that others were wrong, he wanted them to look at the situation without personal prejudices or inclinations. Reginald Rose, the author of the play, deliberately uncovers the true men’s faces to see the full picture of America itself.

Abraham Lincoln once said that democracy is the government of the people, by the people, and for the people, and 12 Angry Men is the effort to remind about our responsibilities. The democracy will work flawlessly when we honestly carry out our duties when we try to understand each other and stay consolidated, otherwise, the nation will fall. Eventually, the whole point of the jury’s deliberation was not about declaring the accused one guilty or innocent, but about the ability of all those absolutely different 12 men to figure out how to cooperate and make a resolution.

WHY DIVERSE TEAMS ARE MORE SUCCESSFUL?

The play uses not-using-name approach, addressing to each man as his juror number. This concept totally justifies itself, because such an anonymity makes this drama germane for anyone anywhere in America. The overall situation intends to make a disturbing social comment on the whole legal system of the country and the way prejudices influence it.

Each juror described in the play wants the verdict to be fair, but the problem is that everyone sees justice in a different light and there is no unique definition of it among the jurors. Juror Eight seeks to remind that when talking about JUSTICE, our desires, passions, backgrounds and failings do not count. This thought made everyone doubt about their personal definition of fairness and look for the right one.

Cindy Coffey, an American history blogger, makes such a point: This play becomes a public service announcement of sorts in reminding the public that our democratic system renders someone innocent until proven guilty beyond a reasonable doubt and the civic responsibilities of American citizens should be taken seriously as a right and an honor of being a member of that democratic society.

The United States Constitution, the art of compromise in the modern world, has a principle of an equitable doubt, which means that a defendant is considered to be innocent until proven guilty. This is one of the most enlightened parts of the document, still, some Americans do not understand it as intended. It is just inappropriate to accept blindly the testimony, without any pursuit to figure it out. Doubt  is a powerful thing sometimes.

For the Sake of the Country

In the play, we distinctly see, that jurors have different and totally unacceptable reasons to convict the accused. While Juror Eight tries to start a serious dialogue about the fate of the accused, others play Tic Tac Toe or just want to leave for Yankees game, another one gets over the flu etc. Is this the design of democracy as we want to see it? Is it really an effective system, when everyone seems to be so indifferent and unenthusiastic about the treatment the accused and so the whole judicial system? The lack of seriousness makes it pointless. Moreover, convicting someone in the terrible crime due to their social class and/or the race makes it worthless.

The democracy is about the collective sense of civic responsibility and duty as the key to justice within the society.

The final shot of the film, describing Juror Eight and Juror Nine shaking their hands and introducing themselves, admits the fact, that the men overcame themselves as individuals in the courthouse in order to become unified about the choice they had to make, the decision they were responsible for and the fate of the person they governed.

12 Angry Men is an unequaled masterpiece of American literature, which serves to unfold the poignant matters of the legal system, justice, and democracy as it is. Our duty is to be responsible to the society and to ourselves first of all for the way we act, the way we think and the way we govern our country.